Parliament House Was Not Built For People Like Obour; We Need Serious People – Rex Omar

Rex Omar known by real name Rex Owusu Marfo is a Ghanaian highlife artist. He first rose to prominence in 1989 with the Aware Pa album which also included the track, Wodofo Ne Hwan? Following this, in 1992 he formed the Highlife Supergroup Nakorex together with fellow Highlife artists Nat Brew and Akosua Agyapong, the group’s name being an acronym made up of the first letters of each member’s name.

He then pursued a solo career. In 2004 Omar was nominated for a Kora award, and in 2005 he was nominated as Artiste of the Year in the Ghana Music Awards.

Following the break-up of the group he eventually became the head of the Ghana Music Rights Organisation (GHAMRO), and in his role as an advocate for greater copyright protections for Ghanaian musicians successfully lobbied President John Agyekum Kufuor to withhold asset to the new Copyright Bill for protections to be strengthened.

He has also called for greater protections for the Ghanaian music market from foreign competition.

Base on the little information above we could see his passion for Ghana’s music and Obour is not a stranger to him since they are all in Ghana’s music industry.

One will wonder why he is not in support of a colleague’s success in something he wishes to achieve.

Well from all indications, Rex Omar is feeling much happier and excited over the loss of former MUSIGA President Bice Osei Kuffour ‘Obour’ in the New Patriotic Party’s (NPP) parliamentary primary elections held on 20th June 2020.

Rex Omar, reacting to the result, chairman for the Ghana Music Rights Organization (GHAMRO) posted on his Twitter “We needed serious people in Parliament and Obour wanted to be there. Good job by the delegates for rejecting him”. 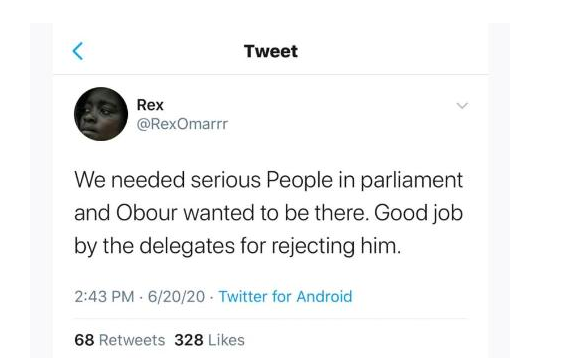 Fella And Medikal Beautifully Sing Together In The Studio, But It Is Assumed As A Shade To Derby